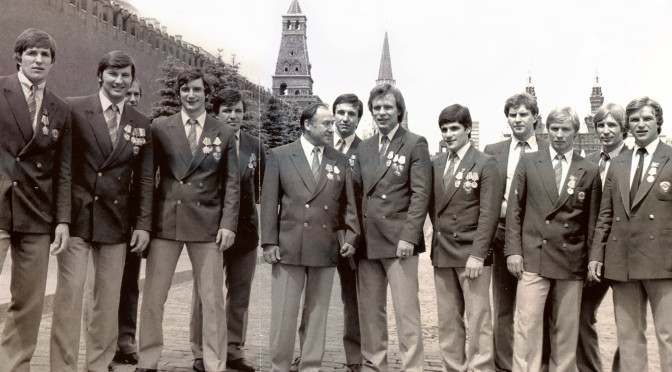 It’s not unusual to see near-identical ideas result in films released at the same time.

Save the world from a killer asteroid. Terrorists attack the White House.

It’s happened again, but it isn’t schlock — it was my unexpected pleasure to enjoy two high quality documentaries about Soviet hockey in a three-day period.

It’s hard to imagine that the directors and producers of ‘Red Army’ and ‘Of Miracles and Men’ weren’t aware of each other’s efforts — particularly since the great defenseman Slava Fetisov pays a pivotal role in both documentaries.

It’s not a repetitive journey — each film uses a different lens to tell the story of Soviet hockey.

“Of Miracles and Men,” an ESPN 30 for 30 production, has a higher concept at its disposal: looking at the 1980 Olympics’ ‘Miracle on Ice’ contest from the point of view of the Soviet players who were on the losing end.

The film’s storyline runs through Fetisov, who agreed to revisit Lake Placid to be interviewed there.

‘Red Army’ tries to paint a broader picture — explaining how the Soviet hockey program worked, trying to unravel the seeming contradiction of how such a brutal and rigid system produced such beautiful hockey.

The answer to that question, in another irony, lies in the efforts of one individual in a collective society: Anatoli Tarasov, the father of Soviet hockey, who developed the intricate passing system that Soviet teams rode to world domination.

Both films tell his story, though it’s featured more heavily in ‘Red Army’ which traces the rise of hockey in the Soviet Union, and also its fall, centering largely on Fetisov, who largely through the force of his will forced open hockey’s Iron Curtain, which had kept Soviet stars from playing abroad.

Both films are well worth anyone’s time; they’re not just for hockey fans.

By happenstance, I saw ‘Red Army’ first, and if one has a choice I
think that’s the best order to watch them in, as it paints a larger canvas that provides context with which to appreciate the specific moment ‘Of Miracles and Men’ revisits.

‘Red Army’ is in theatrical release around the U.S.; ‘Of Miracles and Men’, which debuted on ESPN, is now available on Netflix.