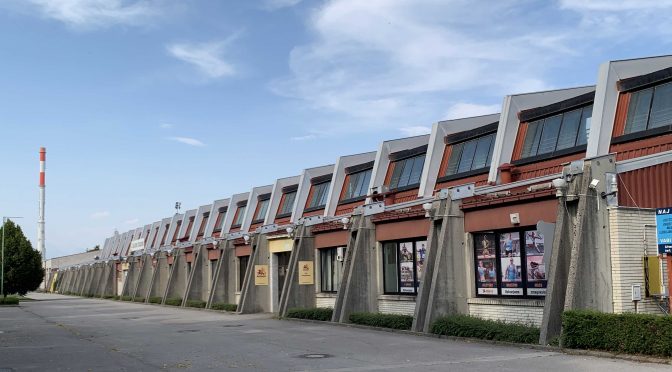 I didn’t go to Europe this summer to watch soccer — but I still managed to get three games in, all in venues still radiating communist-era vibes.

That run started in Ljubljana, Slovenia, where I was delighted to find that late July was late enough for the second round of the country’s first-division soccer league, the PrvaLiga.

And first-division squad NK Bravo was at home the weekend I was in town.

Bravo is not the dominant club in Ljubljana — that status probably belongs to Olimpija, which styles itself as inheritors of the tradition of the Yugoslav-era club of the same name.

Bravo tells a more modest story about itself1If you trust Google translate — the club launched in 2006 with a focus on developing young players, and as those young players aged they joined the league system, rising up the pyramid until qualifying for Slovenia’s first division in 2019.

Unlike their crosstown rivals that play in the late-model stadium used for national team games, Bravo plays in a more humble venue, Park Šiška, the stands of which carry that retrofuturistic socialism vibe that still lingers in parts Slovenia, more than three decades after Yugoslavia became former.

It still does its job. It was searingly hot in Ljubljana that week but the thoughtful architect provided for a covered grandstand, making conditions tolerable, for fans at least.

The game itself was quite enjoyable to watch at a pretty high level of quality, for a reasonable 10 Euros at the gate.

Bravo came out of the gates cool, calm and collected, testing the squad from Koper, forcing keeper Adnan Golubovic to make spectacular some saves.

Koper which found its way into the game later in the first half, and Bravo seemed to fade; Bravo keeper Matija Orbanić saved the day with a fingertip save on the rebound of a Koper shot that hit the crossbar.

As halftime neared, a turnover at midfield led to a quick Bravo counter in which two sharp passes got the ball to trailing midfielder Almin Kurtovič in the box, and the 22-year-old beat the keeper for what proved to be winning score, greeted by loud goal music and a screaming announcement.

That was the only goal, but I thought the game was fun to watch, with attacking football and good passing.

Reunion: The first home game of the season was a get-back-together occasiion for most of the 750 people in attendance. I’d describe the crowd as fairly chatty through most of the game, though the audience rose to the occasion when the game demanded it. In the first half, sitting on the south end of the single stand, I thought I heard organized, ultra-style rhythms coming from the north end. It turned out to be five kids with a couple of Thundersticks.

Partly cloudy: vaping is a thing at Slovenian soccer games.

Sound as ever: I believe they added amperage, but not sound quality, to the original Tito-era PA system.

History lesson: Park Šiška was originally known as the Railway Athletic Club and the stadium is in fact wedged between two railway lines that meet to its south.