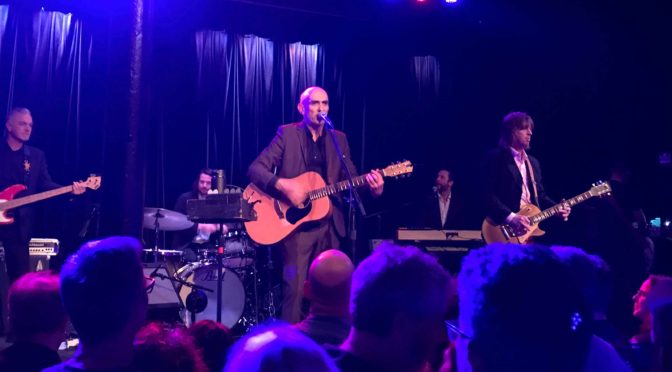 It was ‘Darling it Hurts’  that grabbed me. I don’t recall what exactly inspired me to pick up ‘Gossip’ by Paul Kelly and the Messengers back in 1987 (on cassette!) but that was the song that immediately grabbed my attention, with its upbeat roadhouse rock married to a downbeat tale of a fellow who sees his ex walking the streets.

That terrific tune turned into my gateway into a terrific record, and indeed a musician I have followed ever since, even through the pre-Internet times when it was hard to track a musician from far-away Australia who never quite cracked the States commercially. 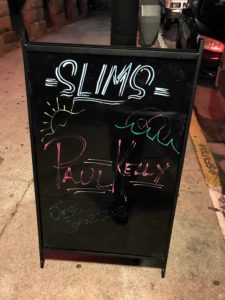 ‘Darling it Hurts’ isn’t quite at the highest level of the Paul Kelly canon — it wasn’t on the greatest hits collection that cemented his position as an Australian icon — and I don’t know that I’ve hever heard it played live.

So what a damned treat and complete, grin-inducing surprise that Paul Kelly and the band closed the pre-encore part of their San Francisco set with that song.

Kelly has a career with rare staying power. After more than three decades of recording, at age 62, he’s still in a position to open a concert by playing his brand new album (it’s very good) in full, in order, and command the audience’s attention.

And then we were treated to the hits.

The band was in terrific form; the highlight for me watching guitarist Ash Taylor. With his red pants and flopping hair, he looked like he’d been time-machined from a Faces show in the 70s, but played much more cleanly, suiting the material. Longtime collaborators Vika and Linda Bull also added their vocals the range of the performance, which ranged from subdued and quiet tunes to all-out rockers.

Kelly has appeared regularly on this side of the Pacific, but typically in an acoustic setup with maybe a single sideman.

This tour was a special treat because its the first time in years — since 2002 I believe — that he has toured North America with a full band.

I’m not sure how the economics of this work; moving a seven-piece band around the United States to play club gigs may not pencil out that great. So it may between a long time and never before we see Paul Kelly in North America with full-band setup again. I’m glad I had the chance.