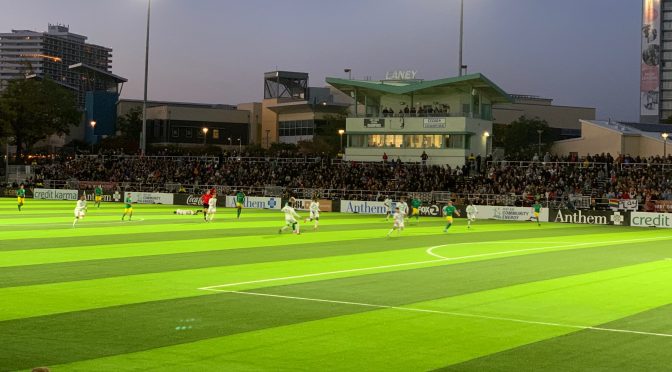 This year I’ve been able to attend two USL Championship games, one on each coast, hosted by two teams having seasons that may well be best remembered for weird and abrupt coaching departures.

What if you come up with a really great merchandise concept, built around the soccer team with a distinct identity (and IP)?

This is the idea I can’t shake when I think about the Oakland Roots.

The team in fact does team up with the truly excellent and truly locally rooted Oaklandish brand for its apparel.

Which could lead one to wonder if the actual soccer team is just sort of a technicality needed to sell the merchandise, the way Southeastern Conference schools must hold classes in order to qualify as college football programs.

It is true, they had some trouble with the basics along the way to fielding a second-division soccer team in Oakland.

But by many accounts team officials are walking the walk to earn their “community based” reputation, though the Roots are ultimately owned by the usual private equity type suspects.

I suspect I’d have a less cynical take if I’d simply had a better time at the soccer game.

But I made some newbie mistakes that detracted from the experience.

Some of it stems from the Roots community-based approach. For instance, they close off a street next to the venue during the games, and the food and drink is sold by local food trucks. Which is cool.

Attending this game solo, I bought a general admission ticket.

And though I got there early, and hungry, the lines at the food vendors forced me in to a Hobson’s choice between being able to see the game and eating. I went for the game.

Part of the problem here is the Laney College Football Stadium. It’s just not big enough, even for second-division soccer. More to the point, though stated capacity is 5,500, only 3,500 are seated and that doesn’t mean the remaining capacity is a Bundesliga-style standing terrace — it’s just standing around wherever you can.

Anyway, I did find a perch on one of the short bleachers on the east side of the field, and I also got to see a competitive and for the most part high-quality soccer game.

The final scoreline doesn’t reflect the state of play on the field — Oakland failed to take advantage of good chances, including one of the slowest penalty kicks I’ve ever seen taken by a pro, allowing Colorado Springs to strike on the counter in the second half, repeatedly, and put the game away.

USL soccer is quite watchable, and it’s nice to have a team so close to home, so I will be back to watch the Roots, and next time come prepared.

That said, as much as we already have too much stadium drama in the East Bay, the Roots need a better venue. And the Roots, who appear to have been reading over my shoulder while this post was in drafts, now formally agree.

If the Roots management needs a blueprint for how to build a USL stadium for soccer fans, they could do worse than take notes at their Oct. 8 road match in Connecticut.

The Hartford Athletics’ stadium is much more welcoming to fans.

Trinity Health Stadium is simple: there’s a soccer field, and on either side of the field are bleachers that provide a good view of the field.

Not that there wasn’t a cost: the old Dillon Stadium is a historic venue, but the state government issued $10 million of bonds to fund new bleachers (and I guess the unfortunate artificial turf field) for the Athletic.

And if there’s a next time for me, I’ll even know that a local brewery has a taproom a short walk from the stadium.

That said, the concessions in my recollection were fairly priced for a U.S. sports event and the food was even edible.

The game gets underway after ‘Seven Nations Army’ is blasted at 90 decibels, and is a pretty good one to watch.

Hartford, though well behind the Rowdies in the standings, played them evenly.

My notes say Juan Obregon Jr. and Joel Johnson were making things happen on the Hartford frontline, though Johnson is listed as a defender and I note later in the game he was playing further back.

The game was highly dramatic.

Tampa got on the board first and took a 1-0 lead to halftime, but the Athletic roared back in the second to take a 2-1 lead, thanks in part to the interesting choice of the Tampa Bay keeper, a man with arms and hands, to head the ball out of the back. Hartford’s Danny Barrera deposited it in the back of his net seconds later.

But in the end the Rowdies win — on the back of a completely deserved penanlty in the 73rd minute, as well as a game-deciding 98th minute penalty that makes one ask, why, if the USL can stream every game, does it not have VAR?

Why did I like the Hartford experience more? The Roots and the Athletic both play in stadiums with room for about the same number of people — the difference is that Hartford has room for 5,500 people to get a good view of the game. Also, you can get concessions and still come back and see the game. Though I’d also note that official attendance was 5,090 and there appared to be more than 410 free spaces on the bleachers of the former Dylan.

Musical note: They won me over (and frankly made me a bit verklempt) by playing “Brass Bonanza” after each goal, just as the Hartford Whalers did.

The power of branding: During the first half, the precocious kid behind me shouted: “I want to see a Bank of America corner kick.”