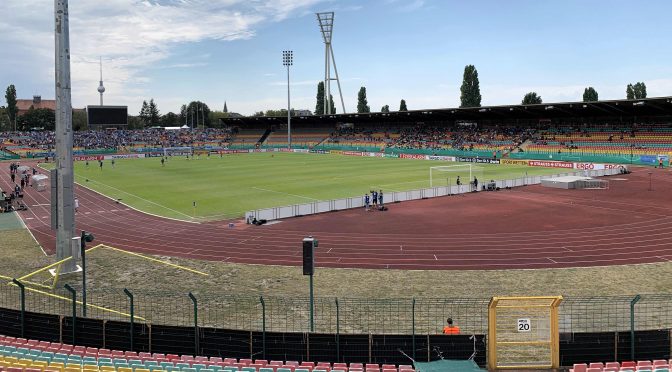 ‘Berlin, Berlin, we’re going to Berlin’ — that’s the song football supporters sing on the terraces during games in the DFB Pokal, the German cup. Though I didn’t hear it today, perhaps because this first round match actually took place in Berlin, between two squads that were highly unlikely to be in Berlin for the final in May at the Olympiastadion.

A Pokal match was on my bucket list for the summer trip to Germany, and the weekend of the first round of the German cup competition found me in the Hauptstadt.

Would there be a match in Berlin? Well, there had to be.

A charming aspect of the German cup is that the first round is always hosted by the lower seed. Which means the big-shot Bundesliga teams must travel to play the lower seed, playing in a lower-league environment.

After the top 40 spots are filled with first, second, and a handful of third division teams, the balance of the tournament is filled with winners of each regional cup competition. Berlin is its own region, ergo, it would have a team hosting a Pokal match,  (In addition to its two first-division teams, who hit the road).

Stepping up for Berlin this year was FC Viktoria 1889 Berlin, which won the 21-22 Berlin Cup, a bit of a consolation prize for a year in which it was relegated after one season in the national third division.

Now preparing for a return to the regional league, Viktoria presumably had even fewer resources to bear to field a roster in its Pokal challenge, but it still carried the stadium lease it signed for its single season in the national competition, hosting the game at the East German museum piece that is the Friedrich-Ludwig-Jahn-Stadion.

It’s a somewhat dilapidated edifice epitomizing the vast gulf between socialist aspirations and outcome, in which the East German national team and Stasi favorites Dynamo played literally next to the wall that kept East Berliners from slipping to the West.1Both sides that merged to make today’s Viktoria were in West Berlin.

The setting has been improved, as the fortifications next to the stadium have been replaced by a park.

They’re only allowed to sell 10,000 tickets at the 20,000 seat venue, which appears to be minimally maintained amid redevelopment plans moving along at Berlin’s typical snail’s pace.

That limit is of little concern, as Viktoria appears to be primarily a youth and development club without a huge fan base for its senior squad.

And only 5,573 tickets were sold for this sunny Berlin Saturday afternoon, the clear majority to Bochum fans who either traveled 300 miles from the Ruhr or have moved to the capital.

The Bochum ultras provided much of the show, filling up the stands behind the south goal with singing and choreographed smoke displays in the team’s blue and white colors.

But Bochum garb dominated in the main stands as well, which were conflict-free, leaving the riot police that had been dispatched to the game with little to do.

Bochum as a club is more used to second-division life in the shadows of nearby Shalke 04 and Borussia Dortmund, but was a tough out after winning promotion to the 21-22 Bundesliga and was never in relegation danger.

So there was a wide gap between the two teams, but not so wide that the game was uncompetitive, though if Bochum had better finishers the score would have been much uglier.

The Berliners were able to control the ball for periods and mount a bit of pressure. Their forward Moritz Seiffert was fast, and appeared to be a dangerous outlet that the Viktorians tried to use several times.

He was fast enough to ask, ‘Why is he in a Regionalliga?’ The answer perhaps showing in an inability to shoot or cross advantegiously after he gained position.

Bochum missed several opportunities early on, before scoring in the 19th and 22nd minutes to remove most doubt, the second goal coming  from Takuma Asano, who would go on to make a bigger impression on German football fans in November, when his late goal for Japan gave the team a World Cup win over Germany.2Though he hasn’t scored for Bochum since.

It was a pleasant sunny afternoon of football, with some touches of quality despite the early season rust in what turned out to be one of the higher points of the season for both squads, now facing relegation fights in their respective leagues, though Bochum won its second-round match and host a Pokal derby Feb. 8 against Borussia Dortmund.